I’ve enjoyed Legionary first as a trader and then a visitor since it started in Broadclyst in 1992. My minor claim to fame is coming up with the name for the show in a committee meeting in my mother’s garden many years ago. I was inspired by Exeter’s Roman heritage and I think I still have the Blue Peter style artwork I made for posters somewhere!

Now housed in The Livestock Centre at Matford near Exeter the show has a good venue with road and public transport access. Plenty of room as well which is always good.

Lots of games and activity this year. I liked the Rapid Fire World War Two game and enjoyed catching up with Will about the lack well proportioned French Indian War figures.

A War and Conquest Dark Ages game from Rob Broom looked fun with a last stand on a hill worthy of the bards.

My favourite game was a 1930s set game based on Exmouth. Appropriately the game was put on by Mick from the Exmouth Imperials Club. This used the Very British Civil War rules and setting. 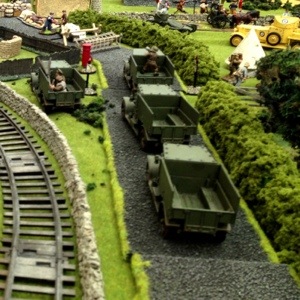 When this game came out I was a bit dubious in case it was an excuse for the lunatic fringe to popularise Mosely’s blackshirts. Happily I was completely wrong and it reflects the full complexity if 1930s politics along with exercising the imagination.

As an aside my father threw eggs at the Blackshirts in London in his teens. He told me they were big blokes, could run fast and hit hard!

One of the bits if the game I really liked was Mick’s approach to depicting the fascists. He portrayed them as PG Woodhouse’s characters. Namely Spode and his Black Shorts. 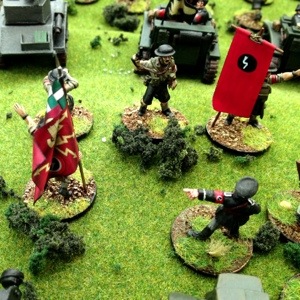 Spode and his Black Shorts

A show is always good for stocking up on figures and stuff! I got a couple of show special offers and a bargain pack of Spartan Officers who will become fashionable officers for Greek mercenaries in my 4th Century BC Persian army. 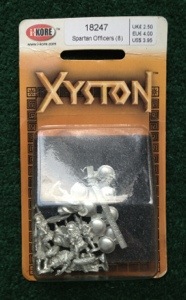 No show is complete without a random purchase. This year it was a baby mammoth. Maybe time for that prehistoric Hordes of the Things army? 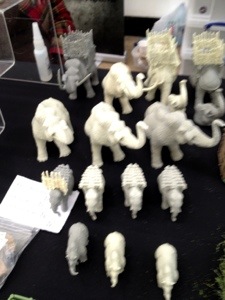