In early November I spent a Monday and Tuesday at the Museums Association Conference followed by the Museums Computer Group Conference on the Friday. Phew!

It was over three years since I last went to conference and the biggest change was it’s a two day event now. Also I think the tone and subjects are more pragmatic. Another change was meeting more colleagues from across Europe. 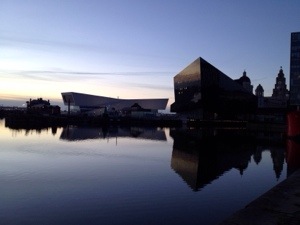 Museum of Liverpool from Albert Dock

There was so much going on that even planning what to do between two of us we could not cover everything. I followed the futurology strand and it was good. I can see myself applying some of the points raised and discussed in my business planning.

I did miss the controversial session with the National Gallery’s director saying national collections should remain in London. Instead of loans visitors could be bussed in from the provinces!

I did catch the debate between Peter Bazalgette and David Fleming. Unfortunately Sir Peter came across as sounding like a politician with talk of tough times and how flexible we are. His claim to have spent £70,000 on an app did not go down well and was later refuted by Arts Council England.

The most fun session was Lucy Worsley on working with TV. Fun but plenty of practical advice too.

As anticipated this had plenty of thought provoking speakers. I particularly liked the piece on the practicalities behind Guardian Witness and the 10 Most project.

I found myself unexpectedly addressing the conference to conduct a straw poll on how many of us had bid for NESTA funding and not got it. This followed the publication of a report stating few museums had succeeded in the funding process.

The last speaker of the day was very inspirational with describing how he gets visitors to engage with science at the Science Gallery’s Ablative Museum in Dublin.

Full report on the day over on the MCG website. It was good to catch up with people too and find out what everyone is up to.