The Viking Ship Museum in Oslo

It started with the Gokstad ship

I read about the Gokstad ship when very young and was fascinated. The survival of so much of the original and the items buried with it caught my imagination. Since then I have read about the Viking age, as it now referred to, at university and then for pleasure. But this ship kept it’s grip on my imagination.
I suspect the ship scenes in the film the Vikings starring Kirk Douglas may also have influenced me.

On a snowy morning in November I caught the bus to the museum. With snow falling it felt most atmospheric walking up to the doors. The museum is cruciform with each ship filling an arm of the cross. The third arm houses the objects.
The first ship is the Oseberg ship and is magnificent. I’ve seen the remains of longships before but not an almost intact one. Before my visit I discussed Viking ship remains with a Danish colleague. We agreed that now restoration as done on these ships is no longer part of museum practice. The restored Oseberg ship does make an impact and is over 90% original. 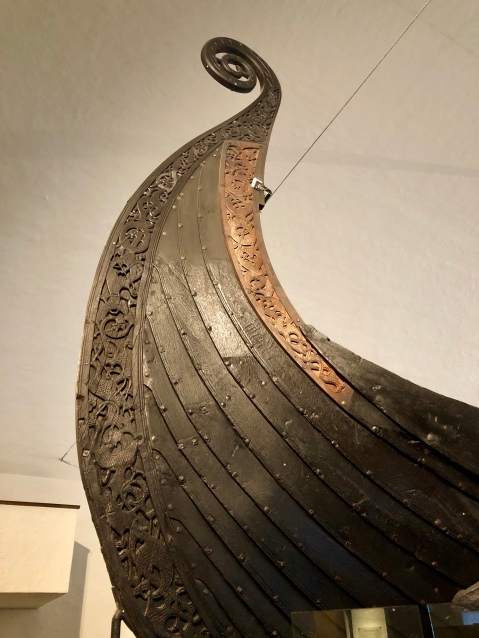 Prow of the Oseberg ship

My next port of call was the Gokstad ship and I was very excited to see it. Did it live up to expectations after 45 years? Yes, it did!
Walking around the ship and seeing some of the objects from it felt a real treat. One of the features of the museum is the small viewing platforms in each ship gallery. These let you see into the ship from above. All the ships were sailing vessels before becoming burial vessels. So you get a good idea of the space available on them.

The Gokstad ship seen from above

The 64 shields from the Gokstad ship are not on display. This disappointed me because I enjoy painting model Vikings with their shields. In contrast some of the peacock feathers from the grave are on display.
Seeing the burial chamber and small boats made up for the shields though. The burial chamber had a large hole made by tomb robbers. The two small boats were complete.

The Tune ship is in poor condition because it’s excavation in 1867 saw items lost and damaged. Given there is not much left of the ship a film about the Vikings plays in this room.
I liked the way the film uses the shape of the gallery. The main focus is the arched end wall but the side walls display supplementary scenes. 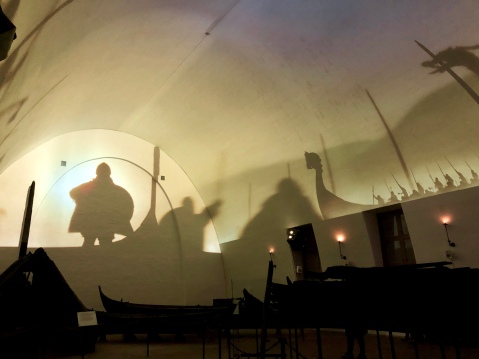 Film playing in the museum

The objects and textile gallery

The remaining gallery contains the object found in the ships including textiles. Seeing a lot of objects from one source for this period was a treat. The amount of carved and applied decoration was astounding.
Most objects were very ornate, such as the horse drawn sleds, and spoke of wealth. Other objects like buckets, tools and loom weights were more everyday items. It was good to see the more everyday objects that most people would use alongside the richer items.
The decorated wagon was not an everyday object. The richness of decoration on is wonderful. I spent some time following the patterns and noticing small parts I had seen in photos in the past. The sleds also have rich ornamentation but replacement runners imply regular use.
The textiles recovered from the graves were remarkable. Patterns and in some cases colour is visible. Another film gave an insight to how the cloth could have looked.

Detail of a sled ornament

The museum shop and cafe

I enjoyed the shop’s mix of expensive things and cheaper traditional museum souvenirs. No prizes for guessing which I got! Luckily there wasn’t a model of the Gokstad ship so my wallet was safe. The cafe is outside the museum and has a very appropriate name as the photo shows.

The museum website has accounts of each ship’s excavation and finds. It also discusses the burials at each site and the need for continuing conservation work.

A tiny spider on the shed door in the sunshine #allotments #sheds
Got everything done on the allotment before sunset thanks to my Cthulhu powered wheelbarrow! #allotment #allotmentlife