Back to my gaming roots

One of my first ancient armies for wargaming was a box of Airfix Ancient Britons. Despite the archaeological anomalies like the solid wheels on the chariots and odd arms and armour in places they were great fun to paint and fought many a battle in the 1970s. I did sell them off when I moved up to 25mm metal figures from Minifigs. However, the Roman invasions of Britain and Boudicca’s revolt kept the interest in gaming with Ancient Britons  alive. Sadly I’ve no photos of those early Ancient Britons nor their Roman opponents 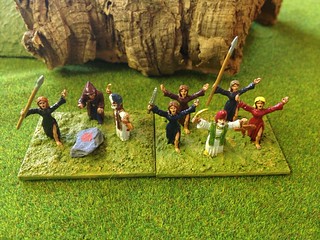 Going down a size

Moving house twice in a year focussed my attention on just how many unpainted little metal men I had. Yes, I used the past tense there!

I decided to clear out anything I just have a few of and wasn’t going to turn into a complete army. I also decided that for big ancients armies I would move to 15mm size figures. This is because they take up less room, are quicker to paint (as I can’t see so much detail now!) and thanks to scale creep are almost as big as my old Airfix figures were!

Before making this decision I considered trying 10mm for ancient and medieval but found them not quite right for me. I used some Pendraken 10mm Vikings as a test and can while they did not suit me I suggest trying Pendraken if you are considering 10mm. I sold these on eBay as part of the grand clear out in the end.

Cracking on in 15mm

Another consideration was having a Peter Pig Roman army in 15mm I had painted for DBA and DBM. Getting a similar scaled opponent made sense of course but like most wargamers I try to leave sense out of it when choosing armies and scales! 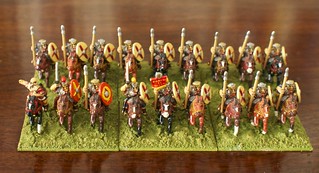 The challenge with painting an army of irregulars is getting the variety there without painting each figure separately. I have a simple system for this involving strips of cardboard!

This is a rather ocd variant of the old take a colour and paint a different bit of each figure with it. To ensure variation I sort the figures into groups with a minimum of duplicates. Then each group is glued to a cardboard strip and undercoated. 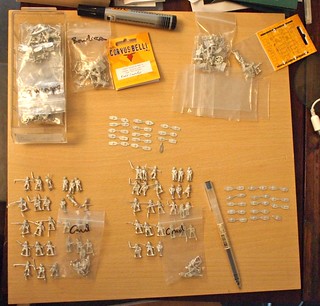 I paint all flesh first using a red brown wash then a warm flesh colour. 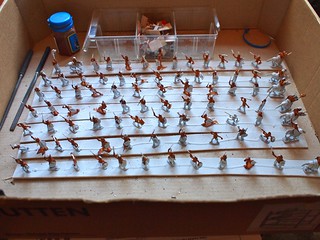 After that the fun begins! Well my idea of painting fun anyway. Take a colour and go through a strip of figures applying it to different areas, so a dark brown is hair on figure one, trousers on figure two, belt on figure three and so on.

Then take another colour and move onto the next strip. As you can now see repetition of colour and pose is kept to a minimum. Having plenty of paints helps!

One point to keep an eye on is use brighter, historically more expensive, colours on better equipped wealthier types. Use patterns on clothing and showy shield decorations as well, again more so for those who could afford them.

For the sake of sanity and speed use one colour for shield backs, spear and weapon shafts, metals. Then varnish and base to taste! 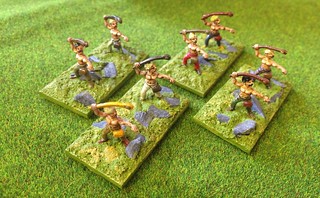 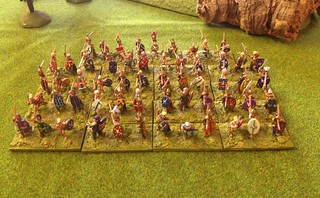 Paddling in the North American Wilderness

… and not in canoes!

I finished this last batch of Indian Allies for my British in North America some time ago. Having caught up with the rest of my life I am catching up with blogging!

Come on in, the water is sticky

Using the water effect was nice and easy. It poured out smoothly with no sudden surges. Well, years of pouring ales and wines may have helped here! Once in place there were some small bubbles.

Getting rid of these with a pin, as I have done with resin casting in the past, was not a good idea. I actually split some bubbles into two! I switched to using an old paint brush and just brushed them out without any problems.

The verdict is I like this product and found it straightforward to use with a little care. I got mine from Maelstrom with some other odds and ends, so I got a discount and post free.

That’s enough of those native chaps for now

I have now finished the three units I planned.  Hopefully the idea of using a different theme on each unit’s bases will let me recognise them on the table top. The photo below should demonstrate the theory!

The 80th Regiment of foot were one of several regiments used as light infantry in the French-Indian War. They adapted their uniform to the North American woods by cutting down their tricorns to caps, carrying light equipment, and abandoning the standard close order formation for a light infantry one.

Light infantry here means a looser formation but still fighting very much as a unit. The emphasis seems to have been on faster movement and flexibility, rather than skirmishing as individuals.

The 80th had various uniforms during this campaign and I have gone for the brown uniform that is classicaly associated with them. I have add some standard issue red trousers for variety. For more on this regiment and campaign see the Seven Years War Project page

How were these tiny dudes done?

80th foot side view of an element

These are Pendraken 10mm and I find they are well cast and easy to clean up. After preparation I sprayed them with a white undercoat. I used various acrylic paints and a Citadel brown wash over the warmer and brighter colours. Flesh is a mix of a tanned and pale tone to give an outdoor European base coat. Colours such as green and blue were a base coat followed by a darker wash.

Finished off with a polyurethane satin varnish for protection. I used Flames of War plastic bases with magnetic stickies to keep figures secure and safe when carting them about. They were based in my usual way and then finished with Testor’s dull coat varnish.

A note on rules and basing

These figures are part of my French-Indian War project. The plan is to paint enough figures to have a reasonable sized engagement on my dining table. Using 10mm figures helps here! Another strand of the plan is to use Piquet Field of Battle rules and this is why I have based the figures as four elements.

Always believing in having a plan B, I can use just three elements with Eighteenth Century Principles of War if Field of Battle proves not to my taste. Observant and informed readers will note that the bases are deeper than Principles of War specifies. This is simply becasue I like the ready made bases and the zone of control effect a deeper base gives. Oh, and more figures per base with space for odd terrain bits.

I take a methodical approach to basing so I get everything done with no omissions. This is my order of attack:

Tools for the task ahead

Over the years I tried different tools from dentist’s tools to carved wooden brush handles for applying textured gloop to bases. This experimentation led me to the conclusion that you need something pointed, flat, and capable of holding enough basing gloop for the job. While in an art shop buying a palette knife for a friend I had an epiphany.

Spreading gloop on bases is like spreading mortar. Therefore a palette knife shaped like a mason’s trowel should be the ideal tool, and it is indeed! I recommend trying one if you haven’t already. The other tool is a brush for brushing gloop into small gaps – and washing gloop off figures where I have spilt it!

Putting a basic texture on a figure’s base can be done in two ways. One is to cover the base in PVA and dip in sand and then paint it. I prefer the alternative approach of using textured paint to cover and paint the base in one go.

I make my own textured paint for basing and have put the recipe on a separate page. There are commercial products you can buy but I enjoy the DIY approach – a bit like wargaming meets cooking.

If you wish to buy ready made ground texture I recommend Basetex. I used it for years and in terms of texture and sensible colours I have not found anything to beat it.

On with the show

Once the glue has dried and your figures are secure on their bases put on the gloop and paint any edges. Then leave to dry for some time – overnight usually does it.

Then I mix PVA glue and the paint I used as the base for the gloop 50:50. I then spodge this on clear areas with an old brush and while it is thick and wet press any scenics I am using into it. I use gaming and model railway scenics according to what looks ok and is on special offer!

An essential accessory - a cup of coffee

Again let it all dry and blow (a photographer’s rocket blower is good but use it outside) or dust with a brush to get any flock or debris off the figures. Then give a final coat of spray varnish in a well ventilated area. This fixes the scenics in place and protects the base paint  work too.

If you are using a spray matt varnish make sure you shake it well; it is not cold; use it on a dry day; don’t pick up a can of undercoat by mistake. This may sound neurotic but temperature and humidity can affect matt varnish.

Unintentionally spraying everything you just finished with undercoat is bad anytime!