The 2014 Museums Association Conference was also the 125th anniversary of the organisation. This was reflected in the opening address by the current president and included a look at past influences on the museum world. I now have a list of interesting people to read about!

The venue was Cardiff and it was great to see the centre of the city and some of Cardiff Bay. I enjoyed seeing friends and meeting new people at the pre-conference tweet up at the Norwegian Church. A lovely building that moved and with a fascinating history.

As usual part of conference was meeting people and catching up. Having a choice of cafés in the main venue definitely helped with this. Regular coffee helped keep conference fatigue at bay too!

Another part of the experience is meeting new people and thinking of new collaborations. I’m looking forward to catching up with the Collections Trust, Leicester University and the Modes team in the near future.

Discussing shared issues with different perspectives is always refreshing too. I expect to continue several conversations and thoughts started at conference.

As usual there were so many things going on it was hard to chose what to go to. Two of us had gone from RAMM which helped cover more ground. Disappointingly a couple of events were crowded out with standing room outside only.

Peering into a crowded digital session

It wasn’t only sitting and listening by any means. Handling ceramics while getting an artist’s view of working with museums was an unexpected pleasure. A moving performance by Mat Fraser on museums and disability made a powerful opener to the second day that will stick with me for some time.

Paul Clifford from the Museum of London ran a session the Maker Movement which was great fun. Not only because of his enthusiasm but also because we got to try things out. Encouraging cognition through making tied in with some of the ideas from the opening address.

Getting hands on at the Makers Session

The 125th celebration at National Museum Wales was in a great space and had a festive feel to it. When people were asked to clear under the central dome I wondered if a giant cake would be wheeled in and Mark Taylor leap out to celebrate his years of service. Three acrobats in swimsuits were almost an anti-climax after that thought!

The Assembly Building by Moonlight

Much Museos at Museum Next 2014

What is Museum Next?

Museum Next is a well established two day conference looking at innovation, technology and emerging trends in museums. It’s the largest conference of its kind in Europe and attracts delegates and speakers from around the world. This year they invited me to speak! 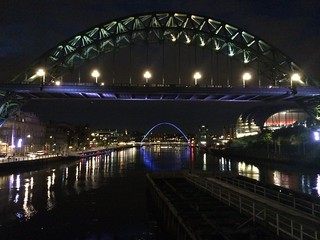 Generally digital technology is maturing in museums although lack of resources is a growing barrier. The problem of digital being put in a compartment and ticked job done is still present for many people. The problem of management appointing digital staff and then not supporting them in implementing change in their organization is also still widespread.

Innovation is still present and different people have different takes on it. A presentation from a commercial development company on Bluetooth LE was very different to the approach being taken by us and Cambridge University Museums.

What was two days of museum innovation technology like?

In a word it was great! Meeting so many enthusiastic people with considered ideas on museums and their relationship with technology really restored my own enthusiasm. Catching up with friends and colleagues was a pleasure as usual. Jim and the team at Sumo did a great job of keeping us thinking and listening not to mention fed and watered. And being in Newcastle is always a pleasure.

My talk was at the end of day one so I kept a light tone to keep people engaged but ensuring I got my key points across. My talk is on my Slideshare page  and was all about how we got collections online where I work.

Some notes on sessions and speakers

From Augmented Reality to Minecraft in Museums Ferry Piekart http://twnkls.com/portfolio/outdoor-augmented-reality-museum-at-the-market/

From Augmented Reality to Minecraft in Museums Adam Clarke http://thecommonpeople.tv/index.html

Getting Your Collections Online Rick Lawrence

Hard to choose but the first keynote for its aspirations to make digital part of the whole, and to stop recreating the museum online and in apps is just ahead of a crowded field! I think Adam Clarke and his work with Minecraft and collections is a worthy runner up!

In early November I spent a Monday and Tuesday at the Museums Association Conference followed by the Museums Computer Group Conference on the Friday. Phew!

It was over three years since I last went to conference and the biggest change was it’s a two day event now. Also I think the tone and subjects are more pragmatic. Another change was meeting more colleagues from across Europe.

Museum of Liverpool from Albert Dock

There was so much going on that even planning what to do between two of us we could not cover everything. I followed the futurology strand and it was good. I can see myself applying some of the points raised and discussed in my business planning.

I did miss the controversial session with the National Gallery’s director saying national collections should remain in London. Instead of loans visitors could be bussed in from the provinces!

I did catch the debate between Peter Bazalgette and David Fleming. Unfortunately Sir Peter came across as sounding like a politician with talk of tough times and how flexible we are. His claim to have spent £70,000 on an app did not go down well and was later refuted by Arts Council England.

The most fun session was Lucy Worsley on working with TV. Fun but plenty of practical advice too.

As anticipated this had plenty of thought provoking speakers. I particularly liked the piece on the practicalities behind Guardian Witness and the 10 Most project.

I found myself unexpectedly addressing the conference to conduct a straw poll on how many of us had bid for NESTA funding and not got it. This followed the publication of a report stating few museums had succeeded in the funding process.

The last speaker of the day was very inspirational with describing how he gets visitors to engage with science at the Science Gallery’s Ablative Museum in Dublin.

Full report on the day over on the MCG website. It was good to catch up with people too and find out what everyone is up to.