The annual wargames show in Exeter

This year’s show lived up to expectations. Plenty of great looking games spread across history with quite a few non historical games. The Star Wars competition looked spectacular with all the space maps joined together. I was so impressed I forgot to take a photo!

A good variety of traders with plenty of stock meant temptation but I mostly managed to resist. And an impressive bring and buy where I got a couple of bargains.

The Exmouth Imperial Wargames Club who run the show had a good looking siege of Helm’s Deep game. The fortress itself was very impressive with the stone beautifully painted. Talking of painting I was impressed to hear the elves had been painted for the game.

Another game that caught my eye was Graham Cookson’s War of 1812 game. The smoke effect on the rocket team looked most convincing!

As usual the show was a great opportunity to catch up with people. I had my annual chat with Martin Goddard from Peter the Pig who seems to be making the Russian army of the Second World War on a 1:1 basis.

I was interested to hear from Helion Books that Bicorne Miniatures are to release a set of figures depicting the Royalist Oxford Army. Good news for English Civil War collectors.

I look forward to next year’s show

Lots of games and Star Wars

The show lived up to expectations this year with lots of games to enjoy. The standard of both demonstration games and participation games was high. The MDF houses in Graham Cookson’s Dad’s Army game even had wallpaper in.

There was a Star Wars X-Wing tournament with all tables filled plus a big armada game. I was really impressed by the quality of the ready painted models. Not so sure about how very close the models get in combat. As Hawkwind said space is big and deep and empty.

My game of the day

I really liked the sci-fi game that used Dropzone Commander card buildings with lots of flock to create a post apocalypse city. The way the colours changed across the board and the central building was the only clear spot added to the atmosphere. It had a look of JG Ballard’s novels to me. Apparently it took an awful lot of hairspray to get the flock in place!

Close up of the Ballardian Sci-Fi game

Sci-Fi game showing the edge of the clear zone

My second favourite game was an American Civil War one. This has lots going on from a signal balloon to a band but didn’t look crowded. A nice variety of eye catching regiments too with zouaves and US Coloured Troops present. All figures were well painted and the terrain had enough presence to add atmosphere without looking cluttered.

ACW game with balloon wranglers and band to the fore

Any show is good for catching up with old friends. Seeing lots of people I’d not seen for a while was one of the best bits of the day.
Knowing Martin from Peter Pig from my days in the games business it was a good chance to catch up with him. Very tempted by his Sudan range still!

A great day out and shopping too!

A good venue complete with cafeteria and bus service added to the day. Some people thought it was a bit cold but I prefer that to a warm and whiffy show!

View across the hall

Purchases were a couple of Warlord Black Powder books and more Perry Miniatures American Civil War figures. And some Hoplites for good measure all from PE2 Collectables. Also got a MDF A frame building from Original Laser Designs who knows his Viking ships and Anglo-Saxon architecture.

MDF Viking ship with Roman signal tower in the background

An annual treat in Exeter

This year’s show had a good cross section of gaming activities. Show games, competitions and trade stands all had a good presence.

Not to mention the old favourites of a bring and buy stand and a raffle! I sold a few bits but didn’t win any prizes.

None of the games on show really grabbed my imagination this year. Not because of a lack of quality as there were plenty of excellent models on fine terrain. Just nothing had that extra zing that stood out for me.

The competition games were well supported with ancients and medieval in evidence along with Warhammer.

With Magister Militum attending I seized the opportunity to stock up on fortifications, tents and baggage for my Roman armies. I’m looking forward to trying out some Early Germans I got from them too.

Alas, Warlord couldn’t keep up with demand so I didn’t get the Civil War engineers set I was after. Some book bargains made up for this along with a fine haul of second hand Slingshots from the bring and buy. 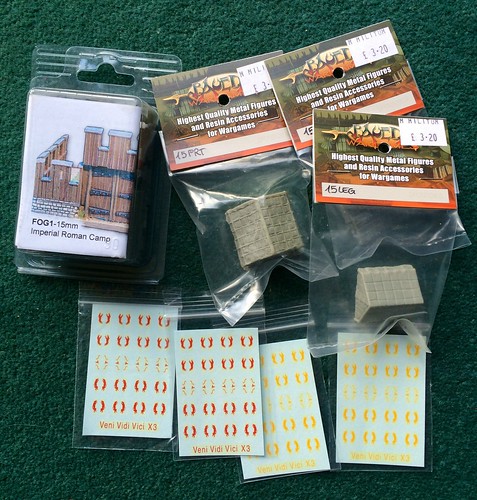 Keep eye on the club website for news of next year’s show. It’s a good show, in a good venue and good transport links.

I’ve enjoyed Legionary first as a trader and then a visitor since it started in Broadclyst in 1992. My minor claim to fame is coming up with the name for the show in a committee meeting in my mother’s garden many years ago. I was inspired by Exeter’s Roman heritage and I think I still have the Blue Peter style artwork I made for posters somewhere!

Now housed in The Livestock Centre at Matford near Exeter the show has a good venue with road and public transport access. Plenty of room as well which is always good.

Lots of games and activity this year. I liked the Rapid Fire World War Two game and enjoyed catching up with Will about the lack well proportioned French Indian War figures.

A War and Conquest Dark Ages game from Rob Broom looked fun with a last stand on a hill worthy of the bards.

My favourite game was a 1930s set game based on Exmouth. Appropriately the game was put on by Mick from the Exmouth Imperials Club. This used the Very British Civil War rules and setting.

When this game came out I was a bit dubious in case it was an excuse for the lunatic fringe to popularise Mosely’s blackshirts. Happily I was completely wrong and it reflects the full complexity if 1930s politics along with exercising the imagination.

As an aside my father threw eggs at the Blackshirts in London in his teens. He told me they were big blokes, could run fast and hit hard!

One of the bits if the game I really liked was Mick’s approach to depicting the fascists. He portrayed them as PG Woodhouse’s characters. Namely Spode and his Black Shorts.

Spode and his Black Shorts

A show is always good for stocking up on figures and stuff! I got a couple of show special offers and a bargain pack of Spartan Officers who will become fashionable officers for Greek mercenaries in my 4th Century BC Persian army.

No show is complete without a random purchase. This year it was a baby mammoth. Maybe time for that prehistoric Hordes of the Things army?