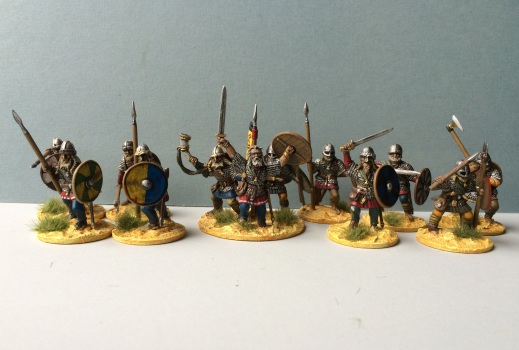 Having decided on the Saga rules and Gripping Beast plastic figures for tabletop Dark Ages fun the first force is complete!

My Viking horde is flexible for 4 and 6 point games. The compulsory warlord, six groups of hirdmen and two groups of warriors

The warlord and his hearthguard

For anyone interested in my painting approach I kept it simple. An undercoat of Humbrol Matt brown 98 To provide shadow and good surface for paint to key onto. Vallejo extra opaque and Citadel base colours are used to give a one coat finish. This meant colours had to reasonably work with the brown undercoat providing shading.

Shields and flags were mainly ready made. I painted the shields on the two warrior units and used transfers from Battle Flag on the rest. Cutting out shield bosses was made easy by buying a 3mm diameter punch. Using the transfers was straightforward but do follow the instructions. Using a transfer softener and sealing with varnish is a must. Having a practice first is a good idea too!

Flags are from the figures instruction sheet and the transfer sheet. Cut out and then stuck together with diluted PVA.

In case I decide to use these figures with another rule set I made up some extras. I painted up some individually based command figures as an alternative to the group for Saga. I also made some standard bearers as a bit of extra bunting always can come in handy! 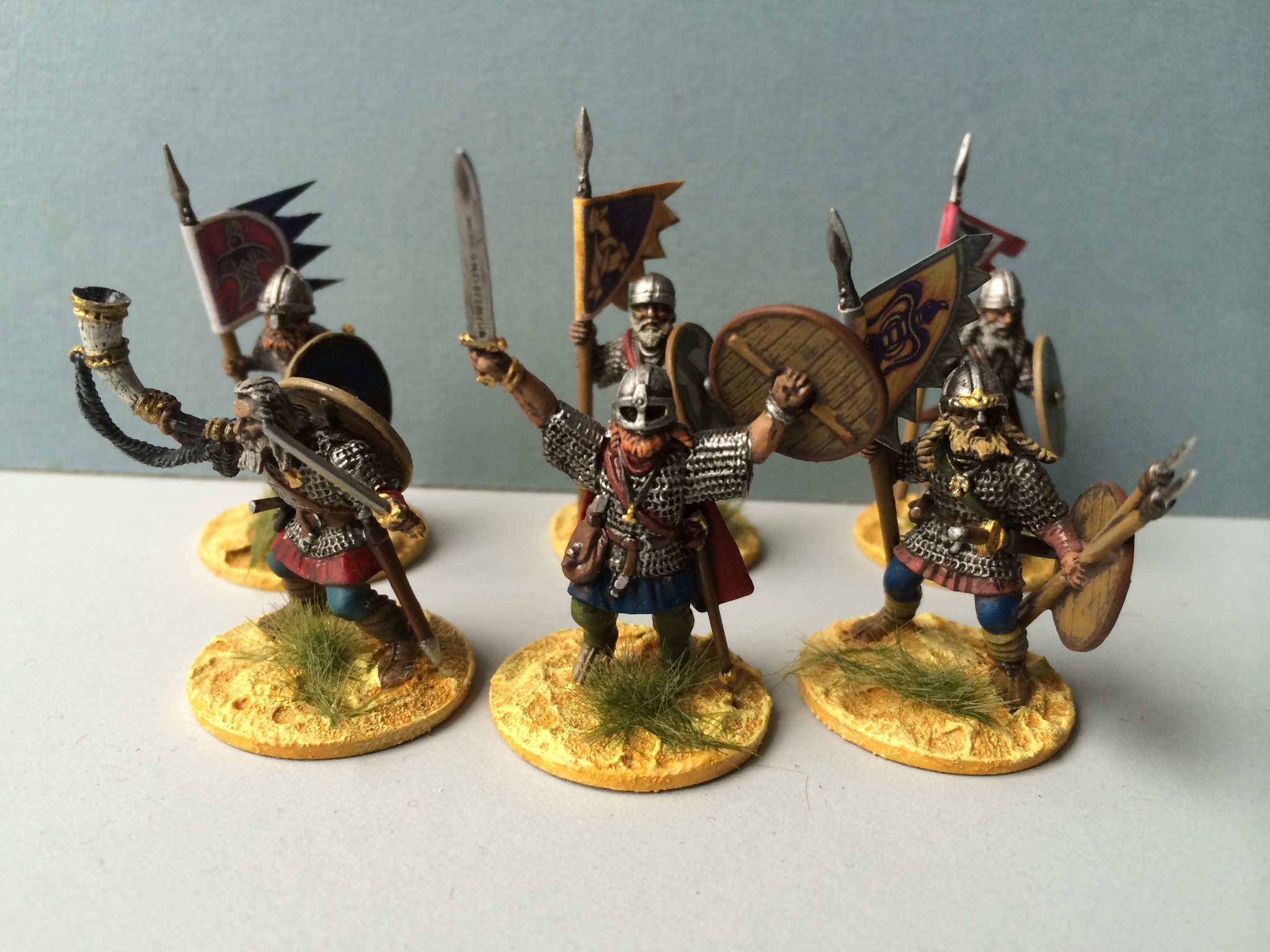 Like many things in life my interest in the Vikings goes back to childhood. Reading the Norse myths followed by the Ladybird book of Alfred the Great triggered an interest that was rekindled at various points in my life.

Principally when studying English Medieval History at school and university, then the fiction of Michael Scott Rohan, followed by Bob Calvert’s Lucky Lief and the Longships album. And of course reading the Penguin translations of the sagas!

Exhibitions, museum displays and visiting sites like Whitby all played their part in keeping my interest alive. As did films like the Hollywood classic with Kirk Douglas and Tony Curtis in and more recently various documentaries on on TV.

Despite this interest I didn’t make any model Vikings until my mid twenties. I confined myself simply to one set of Golberg zinnfiguren Vikings while recovering from an illness.

However, not many years later I was tempted by the Wargames Foundry range of figures. I painted a few Vikings and Normans but with no sign of the range being finished nor finding a set of rules I enjoyed I sold the figures.

In the 1990s I tried 15mm and DBA. I enjoyed painting the Donnington Miniatures figures but the games were not really satisfying, so I sold the armies. Some years ago I got enough Wargames Foundry Vikings for a skirmish force but didn’t find any rules to suit the saga style games I had in mind.

Recently I tried some 10mm Pendraken figures. They were great models with plenty of variety but the thought of painting enough for a large game was too much. So they went on eBay.

Happily for my Norse ambitions the Saga rules appeared. They met my desire for saga inspired character and my painting threshold as only a few figures are needed.

So rules purchased along with plastic Vikings from the ever helpful chaps at Gripping Beast. Vikings are assembled and ready for painting, with Anglo-Saxons up next. 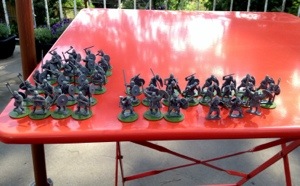